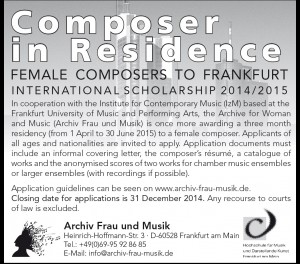 In cooperation with the Institute of Contemporary Music (IzM), based at the Frankfurt Academy of Music and Performing Arts (HfMDK), the Archive for Women in Music (Archiv Frau und Musik) has once more awarded a three month residency to a female composer.
The successful applicant has been chosen by a panel of experts in the field of contemporary music.
At the beginning of the residency in April 2015 the composer will be introduced to the public at the Musikmesse Frankfurt and the residency will conclude with the premier of one of her works in a final concert on 16th July 2015. To this end she will have the opportunity of working on one or more of her pieces with students of the Frankfurt Academy of Music and Performing Arts (HfMDK). Radio Hessen (Hessischer Rundfunk) will act as broadcasting partner.
The work composed during the residency should be a chamber work.

The composer will be provided with cost-free housing in the Hoffmanns Höfe, Frankfurt, a monthly season ticket for Frankfurt’s public transport, and a monthly scholarship allowance of 750 Euros, enabling her to live and work in Frankfurt. Travel costs of the composer up to 400 Euros are covered as well.

During the residency a work shop will take place in co-operation with the Institute of Contemporary Music (IzM). In addition, and in co-operation with the school project “Response” which is run by the Frankfurt Academy of Music (HfMDK), a school class will have the opportunity of working for several days with the resident composer, an instrumentalist and one of the leaders involved in the school project. The idea here is to develop an “answer” to one of the resident’s compositions. The school project “Response” takes a contemporary composition to which children and young adults respond with their own improvisations and compositions. The result of this collaboration will also be performed in the final concert.

Time frame of the Scholarship

The time frame of the 3-month stay is from 13th April to 16th July.

The jury consisted of one representative from each of the following institutions: the International Working Group for Women and Music (Internationaler Arbeitskreis Frau und Musik, e.V.), the Institute for Contemporary Music at the Frankfurt University of Music and Performing Arts (IzM), Hessen Radio (Hessischer Rundfunk), as well as a composer and an active interpreter of contemporary music.
Archiv Frau und Musik
Heinrich-Hoffmann-Str. 3
D-60528 Frankfurt