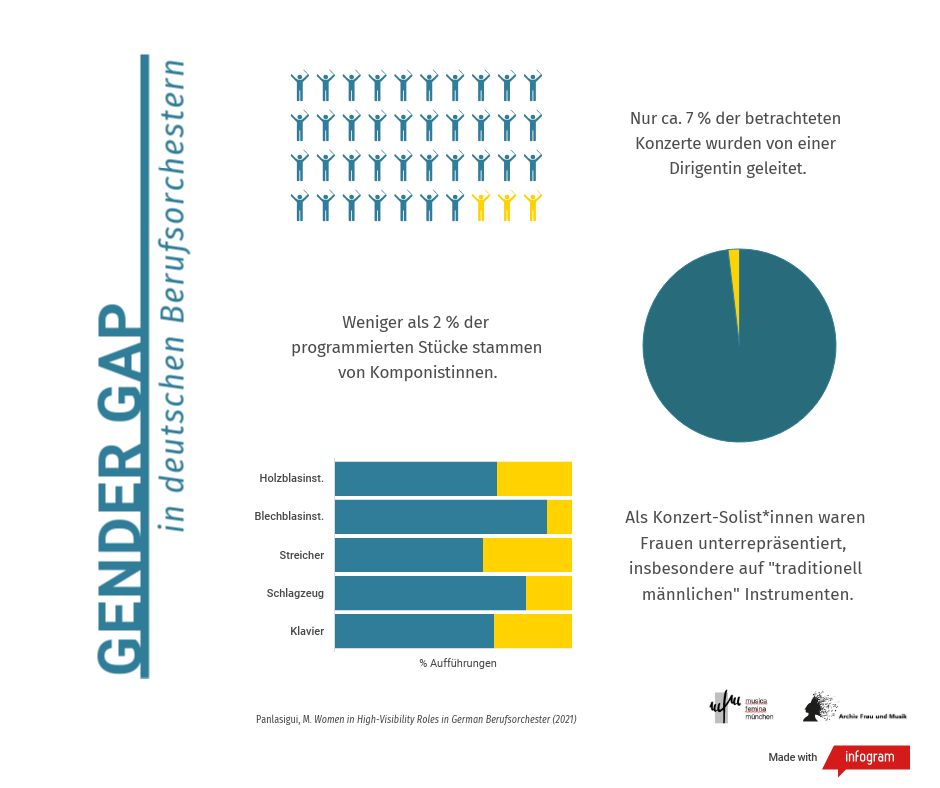 The study examined the gender gap in Berufsorchester in leadership as well as in performance by cataloguing personnel and concert records for the 2019/2020 season. In the leadership roles of general music director and artistic director, women comprised 8 % of positions – a number far below the general national level of 27 % women in leadership positions in Germany according to the Bundesagentur für Arbeit (2019).

Data was analyzed for 120 orchestras comprising over 2000 concerts and more than 6800 performances of works to extract statistics on female representation as composers and conductors. On subscription series, less than 2 % of programming featured works by female composers. However, female composers accounted for 13 % of programming on contemporary music series. Contributing factors to this difference include the relatively higher representation of women among living composers, and the disproportionate amount of performance time in subscription series that is dedicated to eras in which women were systematically excluded from the practice of composition.

Women made up 7 % of conductors active in subscription series. While the female proportion is on the rise, there is still cause for concern. The female participation rate of increase as conductors engaged by Berufsorchester is low relative to that of the German higher education student body, based on statistics compiled by the Deutsches Musikinformationszentrum (German Music Information Center) in 2019. This discrepancy is indicative of continued barriers to female professionalization in the realm of conducting, at least in the context of the Berufsorchester.

The broad overview of women in high-visibility roles in the Berufsorchester provided by the report can be used to inform the implementation of systemic efforts to rectify the historical inequities that continue to manifest in these orchestras, and to serve as a benchmark to measure their efficacy. A follow-up intersectional research study is in progress to investigate inclusion in Berufsorchester with respect to the multifaceted aspects of identity in addition to gender.